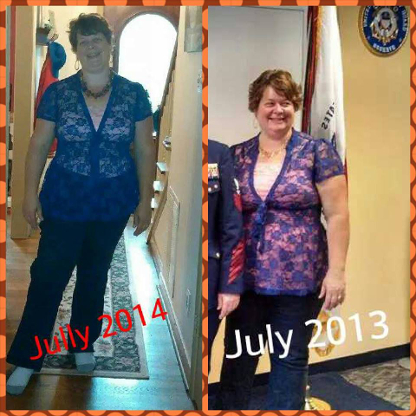 Richmond, VA is known for many things. However, 4 years ago in a small Starbucks on the corner of Libbie and Grove Ave. there was a meeting of emotion and action that changed the course of a families future. It could have been another “networking meeting,” but it was much more. Terri was looking for a solution to a never ending battle with health. Being in her mid-40’s and having to constantly battle her weight had been a struggle.

Over the past 20 years Terri has tried diet after diet, program after program, fad after fad. Who can blame her? The market lies every second of every single day, trying to make a quick buck. The sad thing is that most people fall for these lies the same as Terri had in the past. However, this was different. We have known each other for a few years and while lifestyle came up on its own, she knew my clients & athletes used supplements to enhance their lives.  As she came in to join me, I could tell something was different. It was at that moment that I asked a simple question.

That was all it took to uncover the fact that she was tired, hurting, and struggling with her health. It was that day that caring took over and sharing a solution that my clients knew about for years opened her eyes to what it could be like if she had the health she desired. Terri had hit “rock bottom” and was ready to move her life forward. Spark became her new best friend. She had tried coffee & other energy drinks in the past with no avail. This started a path to better health, happiness, and leadership in her family and biz without her even knowing it.

This meeting was much more about her future than it was any product or program. When someone has poor health they know it and they either care or they don’t. Terri cares A LOT; about her God, her family, and herself. We came up with a game-plan for her to stick with and through that game-plan she was able to enhance the quality of her life tremendously. She  kicked 70lbs to the curb and created positive lifestyle momentum. However, it was never about the weight-loss. It was about the person she became in the process. As life has it, sometimes we are thrown curve-balls. Her curve-ball was a knee replacement, something that she had struggled with for many years. Prior to that operation she had been part of our small team cross-training program. Her workouts were modified to enable her to get results while avoiding injuries to her knee. It was during this time that she also was engaged heavily in nutritional supplements & coaching. Her past was somewhere she had no inkling of going back to. During recovery Terri and I still were engaged in nutritional coaching and supplements. Her physical activity did cut back, but her heart never skipped a beat. She knew the person she wanted to become. As soon as she was able to get back in action she did.

After her long and arduous struggle with rehab Terri now has been training a minimum of 2 times per week, because she has her eyes on the prize, a healthier, happier, and more energetic mother, partner, and leader in her household and her biz. Every week Terri gives it her all and continues pushing past her limits. The funny thing about limits is they are self imposed. The same power that rose Jesus from the grave lives in us. Anything that we supposedly “can’t do” is a lie. We simply have to believe in our Father in Heaven and ourselves. Being so actively involved in fitness for all of my life, it has become second nature to know when someone is on the breaking point. Sometimes all they need to hear is “one more,” “you got this,” etc. Encouragement goes a LONG way and we all need it. Our world is filled with hate, evil, sin, and negativity. It is our job as leaders to shower the world  with love, empowerment, and greatness.

Terri to this day is not where she wants to be, but like me, is an achiever. She always strives to be better, always wants to improve, but does take time to notice the small things that show her improvement is massive.
<br
Take this note and share it with a friend. It may be the one thing that changes their outlook on their life. Maybe their struggle is not with weight loss, it could be financially, it could be relational, it could be sexual, it could be anything. They could be on the verge of breaking. All they need to hear from a beloved friend is the sweet whisper; “keep going, you got this…”

**Share your thoughts. It’s my goal to bring you the best content possible. Without you I can’t do that!**